PART 2 : Getting Started with Traditional Animation -- ON INBETWEENING: A FOUNDATIONAL SKILL

PART 2 : Getting Started with Traditional Animation -- ON INBETWEENING: A FOUNDATIONAL SKILL

If you have the book by Tony White "Animation From Pencils to Pixels"  read his material on  "2D Animation Basics" ,  pg. 342 - 348 on Inbetweening: 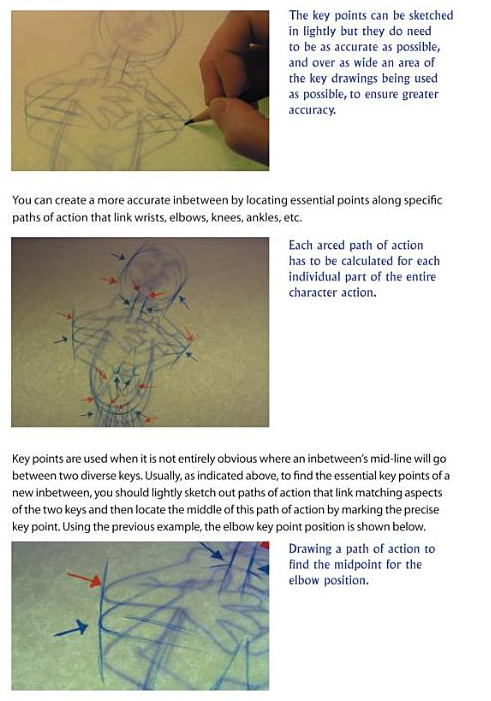 Also take a look at the following videos which demonstrate the inbeween process.

This first video was done by one of the other instructors here at AAU, Tony Claar, where Tony explains very clearly an old inbetweening "trick" to accurately line up inbetween positions. (you'll see the same thing illustrated in Tony White's book Animation From Pencils to Pixels on pg. 342 - 348 ) This "dot method" as Tony calls it , is related to the "off-pegs-shift-and-trace" trick that we'll discuss more about later.

Also review the attached handouts (click the links to download):   "10 Steps to a Perfect Inbetween"  and  "Clean Up Hints" , both of which discuss a little bit about tricks like "off-the-pegs" inbetweening which can increase your speed and accuracy when inbetweening.


In this video clip from a documentary on his career in the mid-1970's  Richard Williams tells the truth about what full-animation inbetweening is about : "Every Drawing is Important " -

(the part about inbetweening starts at the 0:45 mark after the clip from Williams's "A Christmas Carol" )

What he says is true:  "Inbetweening" as a separate step in the process is often times a necessity of mass production pipelines, but in fact anyone who is doing "inbetweens" or "breakdowns" or is a "Key Assistant Clean Up Artist" is doing animation .   Traditional full-animation takes every drawing seriously. (yes, as Dick Williams points out , there are times when there are just straight half-way drawing-between-drawing inbetweens that need to be done to complete the production , but even then you can keep up a high level of craftsmanship.)


*The clip is a bit dated in terms of how Williams refers to what was then possible with computer graphics (c. 1978) , but his essential point still stands:  in classical hand-drawn animation every drawing is important and even "mere inbetweens" should be approached with the sensitivity and skill that only a trained artist can bring to the table.

In traditional inbetweening we build up detail on top after the basic shape has been lightly sketched in and established (usually with light blue or red pencil).

Here's an example of building up a character from rough, basic shapes before refining the final lines of the inbetween .  The main breakdown inbeween to do here is #5 .  Notice how the inbetween is built up by blocking in basic forms first, then tying-down the line detail on top of the basic forms. 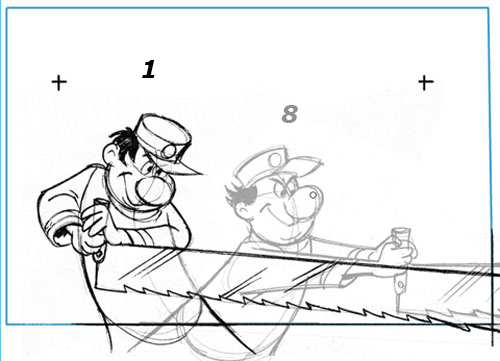 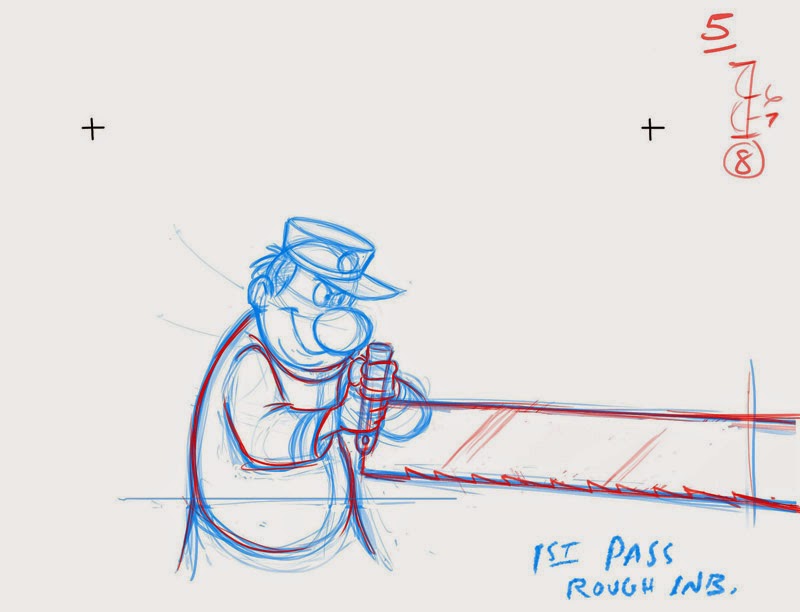 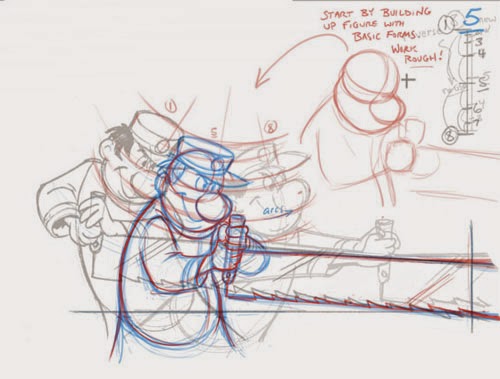 Maybe you'd like to try your hand at doing this test ?  Here are the drawings:

When you get a tricky drawing , you need to first find the Basic Form on a difficult inbetween position,  then add the details after you have the basic form turning correctly:

A Note about working Paperlessly in TVPaint :

You can certainly use the "dot and arcs method" when working paperlessly with a Wacom tablet in TVP Animation , though it is more difficult to simulate taking the drawings off-pegs and shifting them when you're working paperlessly.  (you are encouraged to work traditionally with paper)

NOTE: Starting with TVPaint 9.5  and  continuing in TVPaint 10/10.5  and TVPaint 11 there is an "Inbetween Out-of-Pegs" ("off pegs") function.  This simulates the traditional "off-pegs" technique.

See the online documentation for TVPaint 11:   "Using the Light Table"   and   "The Out-of-Pegs feature".

See this tutorial I made on inbetweening in TVPaint -

Another thing to remember if you're working paperless is that you can get greater accuracy in your inbetweens by zooming-in close on the drawings and working at a larger size. The larger the drawing , the greater control you'll have over your individual strokes. Sometimes when working paperless the best way is to rough your drawing very lightly with basic forms , then zoom in and start to refine the placement of the lines (with the onionskin/light table turned on) as you are zoomed in closer.  Periodically zoom out and scrub through the drawings to check how the lines are flowing.   If you detect any shakiness or jittering in some lines erase and refine the line.

*Learning to animate on a Wacom tablet (Intuos or Cintiq) can be a challenge in and of itself  (to get comfortable with drawing on the tablet) , so as a general rule most people learn the process better by working traditionally with pencil and paper.  Then those traditional inbetweening skills can be applied to working on a tablet.

Here is a playlist of videos I've found on YouTube that cover the topic of inbetweening.  Some of the so-called "tutorials" posted on YouTube are pretty bad,  basically "the blind leading the blind" , made by people who can barely draw or animate ,  but these tutorials on inbetweening presented in this Playlist are ones that I'd recommend you watch .   The ele tutorial on "Animation Clean-up" is more of a "digital inking" tutorial , since it doesn't really cover cleaning-up sequential animation drawings  (dealing with issues of maintaining consistency of volume and line weight from drawing to drawing) , but it's a good tutorial on how to approach cleaning-up a rough drawing .

“ This is a time-lapse video of me creating an "in-between" animation drawing between two "key poses" of animation in about 10 minutes.  I flip constantly to check and see that the lines are moving correctly.”

I would say "flip constantly" is the key phrase here . Students should keep in mind as they are watching this that even if they are working paperlessly with a tablet in an app like TVPaint or Toonboom , they must come up with a viable way to program the "scrub forward /scrub backward" keyboard shortcuts to their Wacom tablet express keys , or use a USB controller like a Griffin Powermate (or even an old game controller) rigged to "flip" back-and-forth between the drawings on the timeline , to simulate traditional flipping/rolling of paper on an animation disc.

This video by former Disney animator Dave Zaboski is a good introduction to animating and inbetweening in TVPaint. Dave uses a hybrid process of starting his rough drawings on paper , then finishing his scene in TVPaint :


Here's another really great tutorial on the basics of animating with TVPaint , by Aaron Blaise:


I'd suggest you watch these video tutorials on  in FULL SCREEN mode so you can see the details .
.
Posted by David at 4:19 PM